FREE SHIPPING TO UAE FOR ORDERS OF AED 200 AND MORE!

ENJOY 10% OFF your first purchase - use code HELLOLOLA10 at checkout! Bear with me - this is my first ever Blog Post (EVER) and whilst I aim to keep future entries within a 2 min. reading frame - this one may slightly stretch it. If, however, you’d like to learn how Hop Lola Hop came about, you may indeed want to read til the end … My author journey started on March 9, 2017. I know that because that day I shared an Instagram photo of my laptop I had sat up at Dubai Public Library. Dubai had been our home for the last two years, having spent the previous ten in London, where I had first toyed with the idea of writing a children’s book.I always enjoyed making up stories. As a kid I kept a diary and sometimes I would use it to write down short stories too. Once I wrote a story about the world travelling adventures of a brave Native American girl. It was for a young writer’s competition but it’s still safely stowed away in a little keepsake box - I had been too shy to submit it. That ‘shyness’ I abandoned when I decided to write about my eldest daughter’s favourite stuffy toy. I knew I wasn’t going to keep the story of Lola under wraps forever and at thevery least would share it with my family and friends. At the time I had noticed lots of parents putting up posters and messages on Facebook groups asking for help in finding their kid’s favourite toy. I was a little surprised when I discovered that there wasn’t an awful lot of published books around the lost toy subject - this realisation and a gentle nudge from my husband and I had all the motivation I needed to change that.

Back at Dubai library, and I eagerly began to type. Being surrounded by books meant it was QUIET and there was little excuse to get distracted. What I wrote that day, admittedly, has very little to do with the book that four years later would go to print. But by the early afternoon and in time for the school run, I had written 1.026 words - I felt pretty accomplished.

Little did I know back then what would go into the making of a children’s book - I just enjoyed the ride - writing and re-writing and doing more writing. Over the coming weeks, I’d continue working on the manuscript and even began to outline plans for follow up stories.

Lola’s adventures might have made it into the public domain a little earlier, if it hadn’t been for the fact that at the end of that year - 2017 - our two girls were about to become big sisters to a baby brother … and we were also getting ready to leave the UAE to move to Denmark.

… in August 2019, a week after I had successfully settled our little one into Danish daycare (Vuggestuen) - I found myself in a quiet corner cafe near the girls’ school, sketching some pencil roughs and practicing hopping bunnies. I hadn’t written in a while but I had done some research and wanted to see how the text would sit across 32 pages together with some visuals. I had always enjoyed drawing - but it didn’t take long to come to the conclusion that this picture book was not going to be illustrated by me (unless I’d invest into another couple of years of art school training). 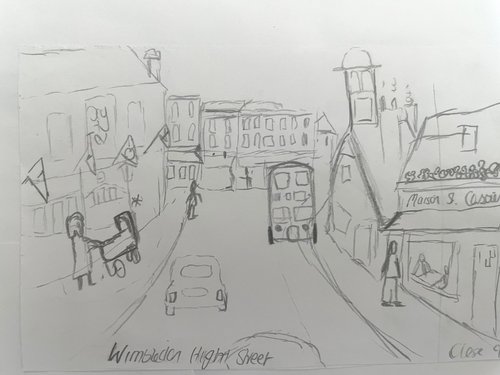 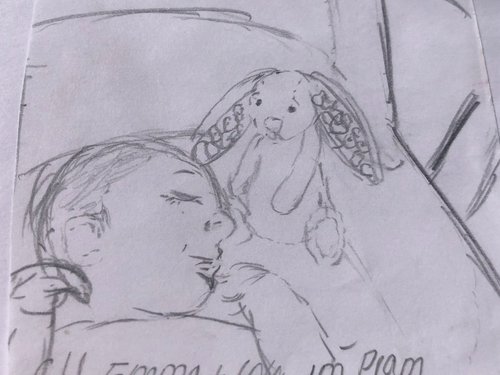 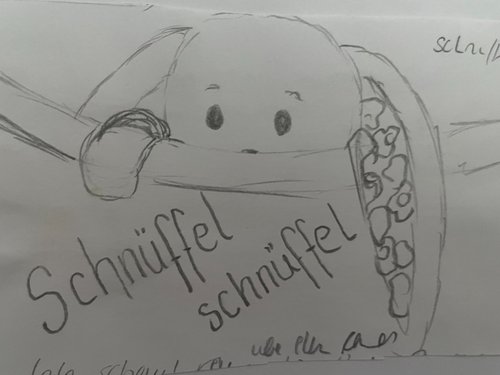 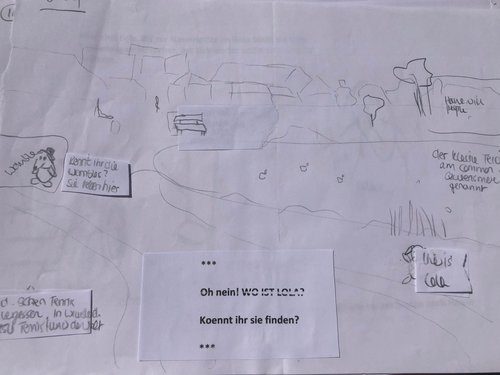 A selection of rough sketches I did back in 2019, as part of my storyboarding efforts for Hop Lola Hop. At the time it was running under the working title - Where is Lola.

I didn’t rush to hire the next best illustrator though, but instead took my time to decide on the next steps. For once I was pretty busy with my day job and then there was the year 2020 that’s put not just mine but everybody else’s lives on hold. It’s been both a disruptive and also a transformative year for me - fast forward by a few months and our family was back in Dubai, where my writing journey had begun and was about to continue.

Instead of getting someone to draw me pretty pictures, I did something else. I hired an editor!

Getting a person on board, who knows the ins and outs of the industry I was looking to enter, to work on your manuscript, offered a brush with publishing reality. My editor wouldn’t tell me how lovely my story was - that’s what friends and family were there for - she was gonna tell me ALL THAT’S WRONG with the manuscript.

And oh yes she did! After a politely phrased introductory paragraph in which she noted that the topic I had chosen was relevant and that she could tell I had writing experience - SHE COMPLETELY TOOK THE MANUSCRIPT APART.

Once she had done that, she offered some valuable advice - to take a break from the manuscript for two weeks and then revisit it.

What followed was the biggest and most important transformation to Lola’s story: the bunny stayed of course, but everything around it changed. The entire editing process took about 8 weeks and several re-writes.

In many ways this was the hardest piece of writing I had ever worked on. As a journalist, I am trained to write news scripts and articles, but that’s stuff usually aimed at an adult audience. Writing for very young children in the most simplest of languages was a different ball game, and I ABSOLUTELY LOVED IT !

The story of Lola was now making great strides and became closer to the version I was eventually going to publish. Once I had settled on the overall story arc, I created a timeline on the wall in the office, to which I would add - move - and remove post-its. Yes, good old POST-IT NOTES continue to be one of the greatest tools to organise ideas in my opinion.

It was a very effective way of moving the story forward, even though that meant ultimately dropping ideas, which I had at some point considered to be outright brilliant.

By the end of the process, my editor congratulated me, and we both felt my manuscript was ready to submit to agents, because that’s what you do at this point … right?

Indeed, I ended up sending out a few emails, but didn’t expect to hear back for a while. Agents - so I heard - have very busy jobs, leaving them with very little time to respond to queries. It was a lovely surprise that I did hear back from some and maybe I should have persevered. But whilst I was waiting to hear back, I started connecting with other writers on social media and was amazed to learn that not all authors have their books sold via a publishing house. THEY PUBLISH THEMSELVES!

Admittedly - this was a revelation to me - in all these years I had no idea that this was something people did. I read some of my fellow indie authors stories and biographies - many were mums like me, but there were others too. We all had one thing in common - we were passionate about the stories we wanted to tell!

Hop Lola Hop won’t be the first and only book that I am planning write, and there may be future projects, which could go down a different publishing route one day. But for Lola that won’t be the case for several reasons:

Lola’s story is a personal one, it’s deeply connected to my years of being a new mum, inspired by the stories I used to tell my little girl every time she lost her bunny.

Secondly, I am not quite sure if the story is agent material - yes, it’s relatable, but it’s not the result of thorough market research and as far as I could tell back then, agents were actively seeking out different topics to pitch to publishing houses. I could have still tried, but it may have taken years until an agent or publisher would finally decided to give Lola’s story a run for its money. And I simply didn’t want to wait that long. I - selfishly - wanted this book out whilst my children were still young enough to care to read it.

There was another dealbreaker - picture books - by definition, are told through the interplay of words and images. If I were to land a traditional publishing deal, ultimately the publisher, who also carries the entire financial risk, would have the say in what the book would look like in its final form. And WHAT IF I DIDN’T LIKE IT? It was at this point that I decided to retain creative control.

As an indie author you’re not just a writer, you quickly learn to become the CEO of your own writing journey, making decisions along the way that help turn that idea in your head into a real-life product.

One of the key decisions included finding the right illustrator. Illustrating a children’s book isn’t an easy task and I knew I didn’t have the right skillset to do it myself, so I was looking for an artist who knew their trade well and who would also share my excitement for Lola and Ella. I ended up hiring several illustrators to do an initial character sketch of the two …

The samples I received were simply wonderful - seeing Ella and Lola for the first time - in visual form - was an almost indescribable feeling. One of them came from Siski, who I had found through an online platform called Reedsy. When I opened Siski’s file for the first time, it literally sent butterflies through my tummy. I had a rough vision of how I imagined Ella and Lola to look like, and suddenly they were there - right in front of me!

I’d love to say at this point that the rest was history, but it definitely wasn’t … four incredibly intensive months were about to follow and I will be talking about the collaboration between Siski and I another time … this would simply go beyond the scope of this post.

There’s a lot that’s happening in the self-publishing world right now, as anyone who’s been venturing that direction will tell you. With technologies like POD (Print on demand) and services like Amazon’s KDP readily available, the publishing world has become more diversified and accessible to the many who dream about having their stories out in printed form.

At the same time, it’s also a very over-saturated market and I truly believe if you want the world to know that your book is out there and - even better - they can own it, you need to work very VERY HARD.

Publishing a book is a business -as is selling apparel, smart devices or a destination holiday. As an indie author you have to change your mindset - you’re not just a writer anymore but you’re an entrepreneur - a business person that sells stuff - BOOKS!

It also means you are up against all the big name authors and the might of the traditional publishing houses whilst you alone carry the financial risk to your book project - 100%. I love writing, I love being creative - my mind often overflows with ideas, but selling a book and marketing it and worse setting up the logistics - THIS OUTRIGHT TERRIFIES ME!

This is the tough part, the really tough part and I am still figuring it out. If you’ve come to read till this point, you will be pleased to know that Lola and I survived many sleepless nights and headaches over print and logistics nightmares. There are many loose ends still waiting to be connected. Hopefully they will. I want to give Lola’s story every chance of success because this little toy bunny fully deserves it.

Thank you for reading. I’ll keep you post-it!